Rice porridge – How to cook Cantonese porridge (the traditional way)

This article outlines how to prepare the silkiest and most comforting Cantonese style porridge. This rice porridge is the breakfast and lunch staple in many Asian countries and serves in Dim Sum restaurants (they call it as jook in Cantonese) as one of the delicacies.

The time-honored Cantonese rice porridge is suitable for almost every palate. This unadorned dish is surprisingly appealing and easy to make.

The best porridge recipe should fulfill the following criteria:

We include this porridge in our breakfast menu and hence would like to share with you how to prepare it at home.

(If you see words like congee or jook in other recipes, it means the same thing as porridge, they all refer to the same Chinese delicacy.)

Many porridge vendors and restaurants are making this basic porridge. They then add other ingredients to transform it into a variety of porridge – pork and eggs porridge, fish porridge, chicken congee, etc. It is more efficient to prepare a base that works in conjunction with other ingredients. The cook only needs to add the chosen ingredients and simmer for a few minutes and is ready to serve. The ingredients added can only be limited by your imagination.

This basic rice porridge is tasty enough to serve on its own, as many customers prefer to order the basic version without adding extra ingredients. We call it as plain porridge 白粥, but in fact, it is more than just water and rice.

Here is my step-by-step explanation of how do we make it.

There are two ways to prepare the rice porridge.

Set aside and proceed to the next step.

Note: 1. 5kg bone yields 2. 5L of stock, which is the amount for the porridge prepared  in this recipe,

Clean the rice by rinsing it twice with plenty of water.

Unless the rice is dirty, do not rinse the rice too many times until the water runs clear. Try to retain as much starch as possible as it will help to thicken the rice porridge.

Soak the rice with water for one to three hours. The rice will become softer after soaking. It helps to shorten the time required to simmer the rice until it disintegrates to form a silky and creamy texture.

The Frozen Method – an alternative way

Simmering the rice from scratch is the traditional way to prepare the rice porridge. It takes a longer time, but the outcome is wonderful. The rice grains will eventually open up like the popcorn and looks very appealing.

There is another method to reduce the cooking time of the porridge substantially. I explain this method in another article ‘Chinese Porridge Recipe”, in which the rice grains are pre-soaked and frozen. You can use this method if you prefer a quicker way, but the result is not the same.

Once the raw rice grain is frozen, the water inside the rice will turn into ice and expands. The expansion will crack the rice grains into small pieces. When the rice is added to the stock, the cracked pieces will disintegrate much faster than the whole grain, but the appearance of the porridge looks like is prepared with broken rice.

Bring the chicken broth to a boil in a stockpot. The amount of water/broth should be about fifteen times by weight of the rice. Add some water to make up the amount if the quantity of the stock is less than required. This measurement is only a guideline as there is no harm if you add more water. It also depends on how long you simmer the rice porridge (the longer you simmer, the creamier the porridge will be), and

Add the rice into the boiling liquid. Keep stirring to prevent the rice from sticking to the bottom of the pot. Let it boil this way for about ten minutes. The rice will expand and start to turn soft.

Be patient if you want a silky smooth porridge

Keep the porridge at a consistent boil.

After that, reduce to the lowest heat possible. Keep the water at a consistent slow boil. That is when you see small bubbles popping up here and there, but the rice grains are not moving much.

Continue simmering for the next one to two hours. Stir occasionally to avoid the rice porridge from sticking to the pot.

The porridge will become thicker as time goes by and more frequent stirring is required to prevent it from sticking.

It is almost ready to serve at the end of 90 minutes.

I said it is ALMOST done because you can see it is creamy, but if I let it cool down in the bowl for a while, it will separate into two layers very slightly.

The ideal rice porridge should be homogenous, and not separating into two layers even leaving it at room temperature for some time.

I will add one century egg to the porridge right after it is boiled. Century egg is alkaline. It helps to disintegrate the rice quickly to form a smooth and creamy texture.

The use of the century egg is optional. Omit it if you are not a fan of it. You need to simmer the porridge for a longer time to achieve the silky texture if you do not use it.

Cut the century egg into tiny pieces (virtually mince it). It will disintegrate into the porridge eventually.

Salted egg is optional because it is not considered as basic porridge anymore if you add ‘ingredients’ into it.

However, salted egg adds a savory and salty note to the silky porridge. Since it is such a universal ingredient for almost all the Cantonese porridges, I have decided to cook the salted egg in the porridge

Remove the salted egg once it is cooked and use it as part of the ingredients for the porridge, for example, salted egg with lean pork porridge 咸蛋瘦肉粥. Keep in mind the salt from the egg will seep into the porridge, and you have to reduce the amount of salt when you season the porridge.

The seasoning should be minimum. Salt is the main seasoning, and leave it to the customer to add other ingredients such as finely shredded ginger, scallions, sesame oil, light soy sauce, and ground white pepper when served. I add one tablespoon of salt (15g) to a pot of rice porridge made by 250g of rice and 3. 7 liters of stock. At the end of the cooking, it reduces to 3 liters and the saltiness is just right.

8. Switch up the basic rice porridge by adding your favorite ingredients

Most of the porridge shops will make a plain porridge base, and then add the ingredients chosen by the customers and cook further for a short while before serving.

If you add a piece of marinated pork along with the salted egg and century egg to the porridge, you will get the famous Cantonese style Century egg and pork porridge. You can get the full recipe and detail explanation in my previous article.

A simple garnish with some chopped scallions and finely cut ginger strips is all you need.

Add some ground white pepper, drizzle some light soy sauce plus a few drops of sesame oil on the porridge and is ready to be served as an endless bow of comfort to warm your heart.

For the chicken broth

For the rice porridge 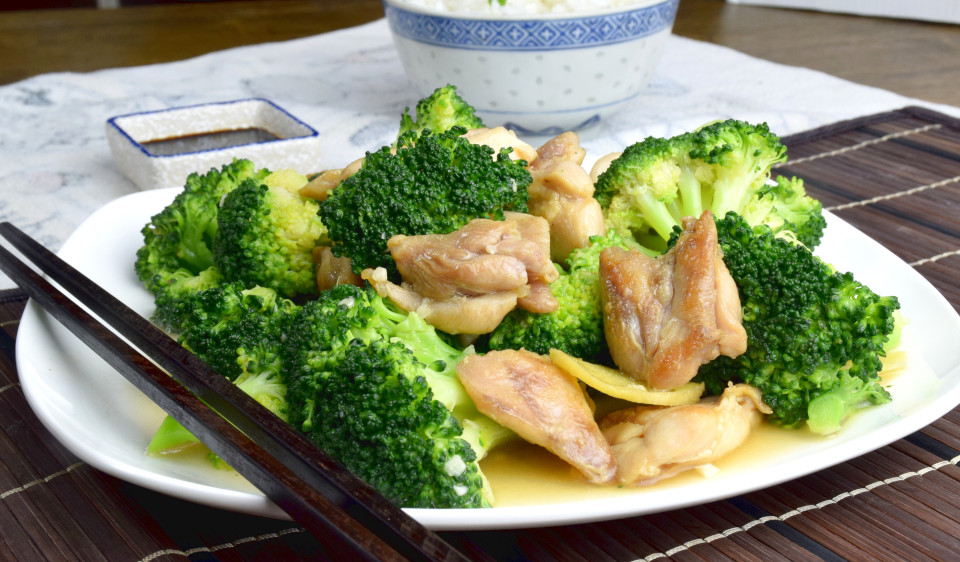 Next →
Bitter gourd recipe- How to braised with chicken and black bean paste
Click here to cancel reply.

Hi KP, thanks for your sharing.

Ps: i also use your rice and water ratio

I would suggest you turn off the heat and reheat only when you want to serve instead of keeping it warm for the whole day. I am not sure the reason as I have not tried that before.

If I want to make scallop porridge, using hokkaido fresh scallops. At which point do i add the scallops? Do I leave them in the whole cooking process?

Hi Daniel, You can add the fresh scallop at the later stage, as long as it is soft and the flavor is released. The dried scallop is commonly used to make porridge, and that should be added to the porridge earlier. KP Kwan

There are many varieties of rice in the market, what type do you recommend to get the best texture for the porridge

I use long grain rice which works fine with me.

would you like to comment on the addition of oats as in the cantonese porridge. will it enhance the taste or texture or both? tku

Dear Kelvin, I have not tried adding oats to the porridge so far. If I make a batch in the future and have a good result, I can edit and include the outcome in the article. Thanks so much for your suggestion. KP Kwan

Hi, this is KP Kwan. I am happy to see you in this comment area, as you have read through my recipe. I am glad to reply to any questions and comments as soon as possible.