How to cook chicken korma

Can’t handle the fiery hot Indian curry?  No problem. Try chicken korma, the flagship of Indian korma curry that tastes heavenly yet so mild that even kids will love it.

Chicken korma is rich and creamy, cooked with plenty of yogurts, and heavily scented with expensive spices. Once it was the noble dish worthy for the Mughal emperors, graced the banquet tables of the imperial Mughal court.  Now, you can enjoy this delicious traditional dish at your comfy home.

Below is my chicken korma recipe, which is primarily based on the authentic Indian recipe with some Malaysian influence.

Note: This post may contain affiliate links. Please read my private policy for more info. I may receive commissions for purchases made through links in this post.

Korma is originated from the Turkish word kavurmais, literally means ‘cooked meat.’  It also spells as Khurma or Kurma, is considered as one of the less spicy versions of curry. It purportedly originated for Persia and were brought into India by the Mughal Empire in the sixteenth century.

Korma can be mildly spiced or fiery hot. You may use lamb, chicken or beef. Some kormas combine meat with vegetables such as spinach and turnip.  You can, of course, add extra chilies to cook if you like. My recipe is relatively mild, but you can add more chili to it to make it spicier.

Cooking chicken korma is easy, but you do need to pay attention to a few steps to get it right. Below is a detailed explanation of how it is prepared.

How to cook Chicken Korma- the step-by-step explanation.

Bone-in and skin-on chicken is most suitable for cooking curries, with no exception to korma chicken.

The marinated chicken pieces can be either grilled or shallow fried. I prefer to pre-fried the chicken in the same pan for roasting the spices to save the time of setting up the grill.

2. Prepare the onion and yogurt paste (the korma sauce)

Cut the onion into thin slices. Separate the onion to become individual pieces.

Saute the onion over low heat until golden brown with some ghee. The chicken korma will taste bitter if the onion is burned by applying too much heat. Therefore, you need to keep the flame small and be patient. Browned onion give a pleasant aroma to the chicken.

Remove the onion and ghee once it is turned golden brown. You can substitute ghee with butter if you only cook Indian cuisine occasionally. Otherwise, get the ghee and cook it the authentic way.

Once the onion is cooled, Put the onion into the food processor, together with the cashew nuts and plain yogurt. Blend until it forms a paste. Set aside the chicken korma paste for later use.

The cashew nuts will give a nutty flavor to the gravy, which also acts as a thickener. You can substitute it with almond, or use half almond and half cashew nuts if you like. There are many different recipes of korma chicken in India, which varied from one region to another. Both nuts are commonly used in the traditional recipes..

Always use plain yogurt for this recipe. Flavored yogurt can alters the taste of the korma chicken. We do not need the additional flavor from these yogurts. The array of spices and herbs in this recipe is enough to keep you drooling!

Roast the dry, whole spices to create a greater depth of aroma and robustness. This is similar to toast a slice of bread, which change the flavor and create a nice aroma. Roasted spices have a different taste than the unroasted one, and much better!

Put the dry spices (clove, cardamom, cumin seeds, and cinnamon stick.) in a heated up pan. It should be hot enough until it is almost too hot to touch.  However, if the pan is way too hot, the spices will get burn, and leave a bitter taste behind.

When you smell the aroma of the spices, and the color starts to darken, it should be ready to use.

Once the whole spices are roasted, add the marinated chicken, black pepper, bay leaf, chili, coriander powder and pan-fried over low heat. Add the onion paste. After that add some water and mix well.

The chicken is braised in a small amount of water, yogurt and the juice exude form itself after cooking for some time. Keep the heat low as the yogurt can get burn easily, Put the lid on so that the chicken will be cooked by the steamed created, or else it will be difficult to cook through over low heat with little liquid.

Open the lid every 5 minutes to give it a stir as it tends to stick to the pan easily. You can also use a  non-stick pan to prevent the chicken korma from the sticking.

5. Finish with some fresh herbs and spices

It takes about twenty minutes for the chicken to become fully cooked. When it is done, add some additional garam masala and freshly chopped coriander leaves.

Chicken korma is best to serve with biryani rice or jeera rice. It is also a great joy to soak up the gravy with naan, paratha or chapati.

You can add one finely chopped tomato to replace the water to cook the chicken. You may also want to add more red chili instead of just using two small green chilies as in this recipe.

There is no rulebook to follow how to cook chicken korma.  Thus you can improvise the recipe the way that you like. I prefer to cook the korma chicken without red chili and tomato because most curries which are red and look alike. The color of this recipe is definitely not even close to red, and the tone down hotness also means it will be appreciated by everyone.

Yogurt.
You can substitute the yogurt with heavy cream or coconut milk. Many cooks are using either one of them or the combination. These are all acceptable variations. Stick to yogurt if you want the truly authentic flavor.

Nuts
Cashew nuts and almond are both commonly used nuts in Indian cooking. They render a smooth and creamy texture to the korma chicken. Nuts also help to thicken the gravy.

Oil.
Ghee is best for making korma chicken. Butter is the closest substitute. Plain vegetable oil is OK but is not as great as ghee and butter.

The spices.
I use the common herbs and spices to prepare korma chicken in this recipe. Some chefs may prefer otherwise or want to add some local flavor to the korma.   For example, to include star anise and poppy seeds as well. In Malaysia, a small amount of Malaysian meat curry powder is added to the korma chicken too.

(A) To marinate the chicken

(B )To make the paste for frying

(D) To cook the chicken

← Previous
How to make curry puffs in three simple steps 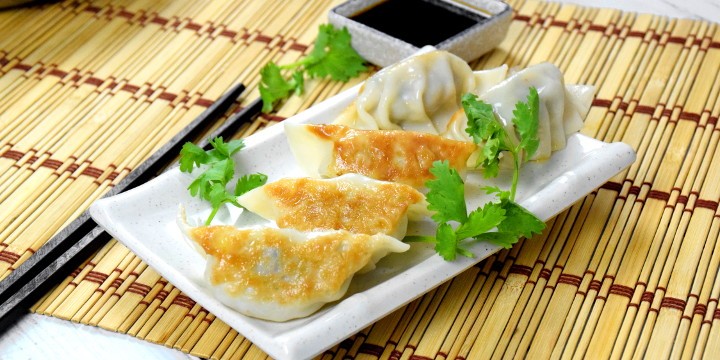 Next →
How to make Gyoza 餃子(ぎょうざ) in 4 simple steps
Click here to cancel reply.

Thank you so much for this detailed recipe, you have explained all the steps so nicely. It is somewhat different from what I employ, but your method also looks quite interesting... will definitely try it out.

Hi Amit, Thank you so much for reading my recipe. I am sure your korma is equally tasty since there are different ways to prepare it. Enjoy! KP Kwan

I made this last night and it was just completely delicious. Thanks!

Hi Nero, So glad to know that it works and you enjoy the korma chicken. KP Kwan

[…] the flavor of the chicken meat, not to overshadow it. This treatment is a stark contrast to cooking curry that emphasizes on the complexity of the […]

Hey Kwan thanks for your prompt response . Yes indeed i tired it just the way you guided with my some additional stuff it came well everyone who visited to to celebrate Eid said its well done that credit goes to you man. Thanks once again . By the way are you a Malay?

Hi Sharmila, Happy to know that your guests like it. I am a Malaysian Chinese. Happy belated Eid al-Adha :) KP Kwan

Hi Kwan how are you doing? Hope all goes well with you. Just wanted to give a great compliment for your Chicken Khurma video it seems to be fabulous and looks yummy believe that it will work out for me the same way. Thanks for sharing your lovely recipes .

Hi Sharmila, My Chicken korma recipe may have some local influence from Malaysia, where I live. So it may not be the authentic version but people here like it. Hope you will like the way I make it too. Cheers! KP Kwan