Here is the best roast pork tenderloin recipe seasoned with Chinese five-spice powder that is juicy inside with a well-seared crust.

Roast pork tenderloin tends to be dry, but there is a full-proof method to guarantee that it turns out juicy. You can achieve it by using the reverse sear method.

Five-spice powder is the traditional Chinese seasoning that comprises the five most commonly used spices in Chinese cooking, but it is seldom used for roasted pork tenderloin. So I tested it, and the result of this roast pork tenderloin recipe is phenomenal, with a juicy and remarkably tender texture of tenderloin.

The flavor is heightened by pairing with a garlic and butter sauce serving on the meat pieces, cut medallion.

Let get into the details.

How to Roast pork tenderloin to perfection

Pork tenderloin is not loin. It is a cut of pork that is relatively small, about a pound each. Therefore most of the roast pork tenderloin recipe suggests roasting the whole tenderloin without cutting it. It is the leanest cut of pork, with only 120 calories and 3g of total fat for every 3 ounces of serving. As such, it is as lean as a skinless chicken breast.

1. Season and marinate in advance

Tenderloin is exceptionally tender, as the name tenderloin implies.  It has a nearly melt-in-the-mouth texture and virtually without any tendon.  However, since it is low in fat, it is easily overcooked and becomes too dry, which I will discuss in detail in the following sections.

What is five-spice powder?

It is sold in almost all Asian grocery stores. If you intend to make it yourself, toast all the ingredients without oil until aromatic, follow by grinding it with a spice grinder. Lastly, let it pass through a fine wire mesh strainer to remove the larger pieces.

I use the reverse sear method for this roast pork tenderloin recipe. That means the meat is roasted in the oven at low temperature until it is just cooked, followed by browning the surface with a cast iron pan.

Since the heat is from the outside with the conventional roasting method, the center will overcook when you get a perfectly brown exterior, causing the juice to squeeze out and become dry. This problem does not happen with the reverse sear method.

Reverse sear refers to the cooking method of roasting followed by searing the meat. This method will effectively brown the surface without worrying about overcooking the internal of the meat. That is why I pick this method for the roast pork tenderloin recipe.

4. Make a garlic sauce as the topping

I recommend making a butter garlic sauce to serve with the five-spice pork tenderloin. The sauce is made with some butter, chopped garlic, scallion, and some red chilies. It serves purposes:

Other interesting pork recipes that you may want to try

If you like this roast pork tenderloin recipe, you will also want to try the following related recipe:

Have you ever try a bowl of pork belly served up-ended? This braised pork belly with taro has an intense flavor and therefore is best to eat with some Asian leafy greens such as bok choy or lettuce.

The Vietnamese pork chop is full of unique lemongrass flavor and hardly goes wrong. Its universal appeal has made it become one of the most popular items on the menu.

Bak Kut Teh is a typical meat dish in Malaysia. It is a meat and pork rib dish cooked in a broth flavored with various Chinese medicinal herbs. This article shows you how to make it at home from scratch.

Ingredients A (for the pork)

Ingredients B (for the sauce) 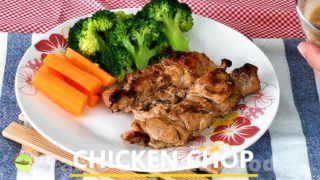 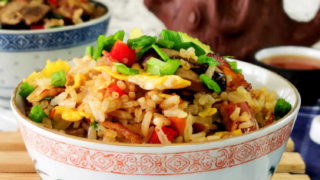 Hi, this is KP Kwan. I am happy to see you in this comment area as you have read through my recipe. I am pleased to reply to any questions and comments as soon as possible.