Taiwanese salt and pepper chicken is the crispiest fried chicken I have ever tasted. It stays crispy even after one hour!

The secret? Deep-fried the chicken twice.

In this article, I want to share with you how to produce the glass shattering crispiness exterior with the correct frying methods, and the proper way to flour and coat the chicken.

This street snack is famous, especially at the Taiwanese night markets. It has a few Chinese names: 咸酥鸡, 盐酥鸡,椒盐鸡块 which all mean the same item. It is translated mainly as Taiwanese salt and pepper chicken or Taiwanese popcorn chicken in English, although I do not know how is it related to popcorns.

How to prepare salt and pepper chicken

I have divided this recipe into sections:

Let’s get into the detail one by one.

You can use either breast or thigh meat (with or without the bone) to prepare the Taiwanese salt and pepper chicken. I prefer thigh over breast meat for its tenderness and texture.

Most of the Chinese salt and pepper chicken recipe suggest using sweet potato starch. I couldn’t find sweet potato starch after visiting a few grocery shops, so I have decided to test other starches to find out whether these are a suitable alternative.

I conducted a simple experiment by using cornstarch, potato starch, and wheat starch to coat the chicken. The result showed that there are very similar between the three types of starches. All of them remain crunchy after one hour. They do look slightly different, and the one with potato starch has the best appearance. I finally settle with potato starch for this recipe.

The success of this recipe lies heavily on deep fried the chicken twice. In summary, here are the steps:

Double deep fry is the secret step to make it stays crunchy for an hour after deep frying. The following section explains in detail what is happening to the chicken during frying, and the reason behind.

The science behind the double-fried method

Those who are familiar with how to cook French fries will know that double frying is the recommended method to produce the crispy texture.

The same method is used to fry the Taiwanese salt and pepper chicken, which stays crispy for an hour after deep frying.

How does this accomplish, and what is happening behind the scene?

Although food scientists are still exploring why double-fried can produce a glass shattering crispy crust, the following is the most likely explanation:

The first round of deep-frying (the dehydration phase)

You will notice the chicken pieces sizzle and bubbles are cradling the chicken during the first round of deep-frying. That is because the water in the chicken starts boiling and evaporating. Some people misinterpret that the oil is boiling, which is not. Most of the vegetable oil will only reach the boiling point at 200°C/390°F and above. The first round of frying is way below this temperature, ideally around 175°C/350°F.

The lower temperature is used to remove as much water as possible from the surface, and not to brown the chicken since there is another round of frying.

Since the goal is to dehydrate the exterior of the chicken, we need to keep the chicken as dry as possible to achieve the maximum effect. That is why we coat the battered chicken with an abundance of potato starch before the first round of frying. The starch will absorb any moisture migrates to the surface from the interior, keep the exterior dry and form a crust to protect the interior from drying out during deep frying.

The baking soda in the recipe will release carbon dioxide during frying, causing the flour batter to expand quickly and enable rooms for rapid loss of moisture to form a crispy crust. As a result, a thick crust is build up after the first round of frying.

The second round of deep-frying (to form the  crispy crust)

The chicken is nearly cooked and with a fragile coating after the first round of deep-frying.  Remove it from the oil and let it rests on paper towels for a few minutes to drain off the oil,  creating more opportunities for the moisture to escape.

Deep-fried the chicken again at a higher temperature to drive off the remaining water. You will see the internal moisture escaping, and bubbles are streaming out from in interior.

The second frying will quickly dry up the outer crust, causing it to form a crisp, glassy crunch layer of coating.

Part 4: Prepare the basil leaves and salt and pepper powder

Mix the salt, white pepper powder, and five-spice powder. Then toast in a pan over low heat until it becomes fragrant. You can also add some chili powder for a spicy version.

Sprinkle the seasonings on the fried chicken and serve immediately.

Wash and dry the basil leaves thoroughly with kitchen paper towel and deep fried until crispy. The oil will splutter if the leaves are wet. Combine with the chicken and sprinkle the salt and pepper mix, serve.

Coating with the batter versus with the dry flour mix

Since the purpose of the first round of deep frying is to dehydrate the exterior, I thought it is possible to coat the chicken with the flour mix alone without water, hoping to get a crisper result.

However, the flour mix was unable to form a crust effectively on the surface due to lack of adherence power, as opposed to the batter. The final crust was too thin to protect the chicken, resulting in a dry interior and thin exterior coating.

Conclusion: Coat the chicken with dry flour mix is not recommended.

Remove the bone of the chicken and cut away the skin.

Cut the chicken into bite-size pieces, no larger than an inch square.

Marinate at least half an hour.

Drench the marinated chicken pieces in the batter.

Coat the chicken with the potato starch.

Remove and set aside to let it rests for a few minutes.

Deep-fry for the second time at 200°C/390°F until golden brown, about one minute.

Wash and dry the basil leaves thoroughly with kitchen paper and deep fried until crispy.

Mix the salt, white pepper powder, and five-spice powder and toast in a pan over low heat until fragrant.

Sprinkle the seasonings on the fried chicken and serve immediately.

If you encounter any audio / visual problem of viewing this video, you can view it from YouTube by clicking this link, which will open in a new tab. 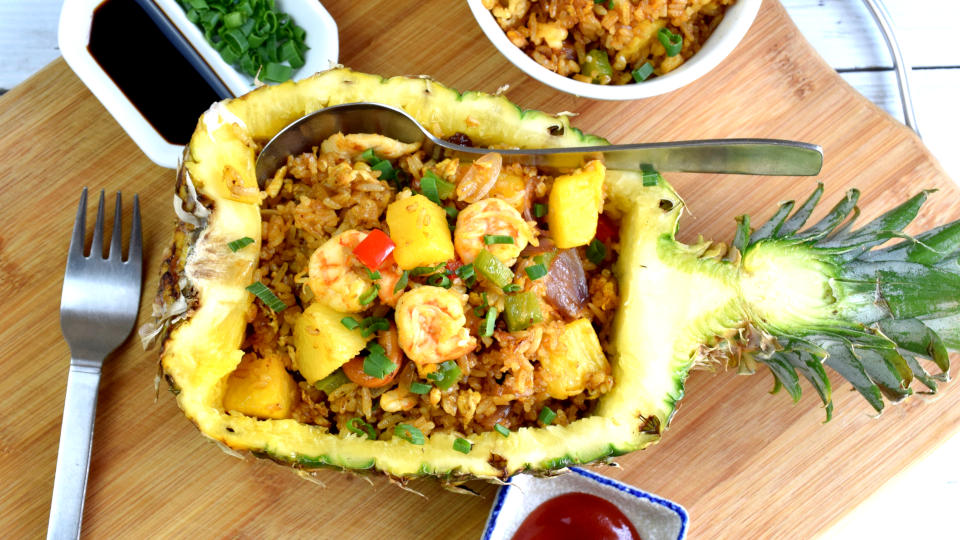 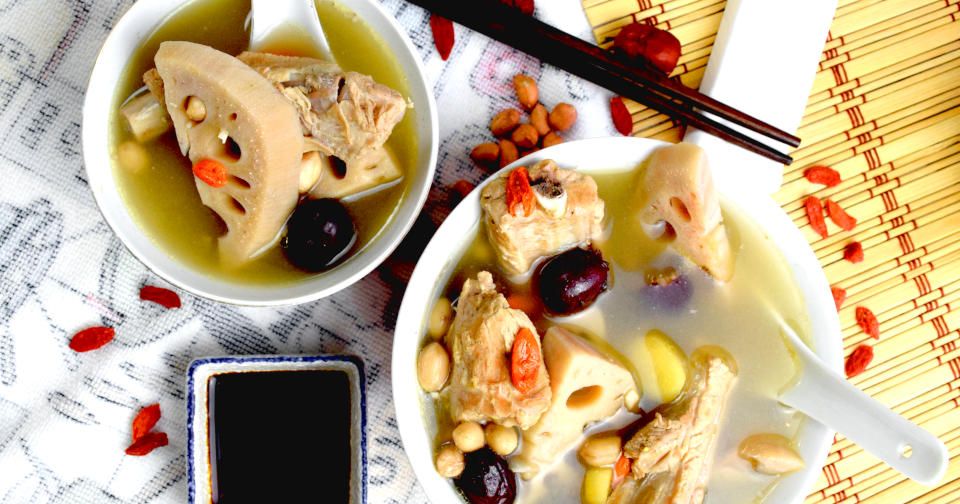 Next →
Lotus Root Soup - How to prepare in 3 simple steps
Click here to cancel reply.

Hello...I'm looking for a crispy sweet and spicy chicken recipe. I ate this kind of recipe from a restaurant. Which are 2 hours ride from my place. This chicken is crispy even it is covered with a sauce on top of it which is sweet and spicy. Can you help me with this? I tried some of your recipes and the taste is really good and it will be included, together with this sweet and spicy chicken in my menu for our upcoming opening of a kitchenette in front of our office. Thank you in advance. More power.

Hi Lara, I am not sure what sweet and spicy sauce you are looking for to coat the chicken. However, you can follow the method I used in the Marmite chicken recipe to make the chicken stays crispy for some time. Follow this link please: https://tasteasianfood.com/marmite-chicken/ I do have a sweet and sour chicken recipe that you can search from this food blog. Regards, KP Kwan

Hi, this is KP Kwan. I am happy to see you in this comment area, as you have read through my recipe. I am glad to reply to any questions and comments as soon as possible.